What is the average UK female’s height?

As of the time of this writing, UK has a population of over 67.1 million. The female population accounts for around 51%.

According to Office for National Statistics, the average female height in UK is 164.3 cm in 2023.  Female adult refers to someone is 18 years or older.

An average UK women’s height is considered quite tall compared with other countries in the world. Recent years’ female height ranking data (between 2009 and 2019) shows UK women’s height has gone from 48th place to 49th place. The ranking was hardly changed. During this period, average UK women height has grown from 163.6 cm to 163.9 cm. The growth rate is very slow. 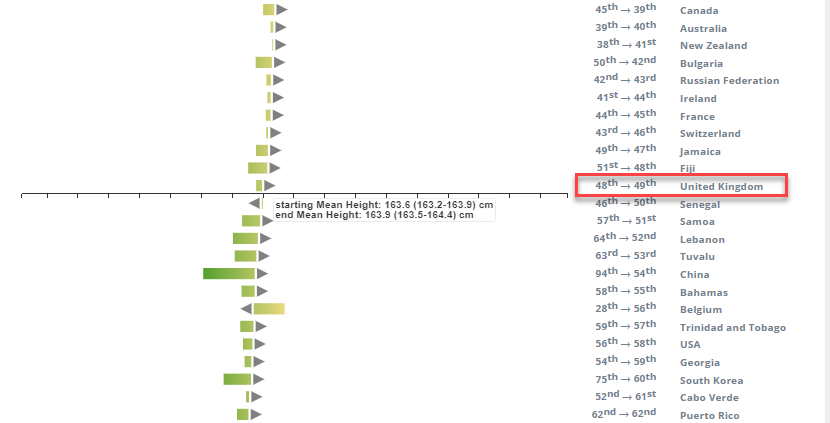 What are the factors that will impact a female’s height?

There are several factors that might impact height, and it is critical to understand how they work to properly know how height is decided.

A person’s body grows because of numerous processes governed by hormones and DNA. The growth plates in a person’s bones are responsible for growing taller, yet these plates can only go so far before halting. As a result, some people develop less than others at certain stages of their life. According to statistics, senior citizens are on average shorter than younger adults.

Genes are not the only factor influencing a person’s height. A variety of lifestyle variables contribute to some boys’ incapacity to grow taller.

Some of these reasons include:

If everyone in your family is tall, chances are you are as well. After all, genetics is the primary determinant of a person’s height. In general, the taller the parents are, the taller the child will be, and vice versa is also true.

How to estimate a girl’s height when she becomes an adult female?

The easiest way to predict a girl’s height is called the mid-parental method.

To adopt this approach, add the mother’s and father’s heights in inches and divide by two. Subtract 2 1/2 inches from that figure.

For example, if a girl had a 70-inch-tall father and a 60-inch-tall mother, the anticipated height for the daughter would be derived using the following formulas.